Richard Perini – Has Appreciation for (Almost) all Types of Music

Mr. Perini has been teaching at GOA since 2009. He teaches music at the Lower School to third, fourth, and fifth graders. This year he also leads the sixth grade band at the Upper School.

“This is the best group of kids I’ve ever worked with,” Perini said. “These kids are happy to play. They’re happy to be learning.” 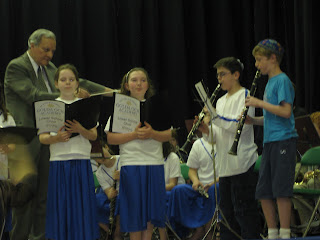 Mr. Perini has taught music since 1963 and says he is impressed with the students at GOA because their upbringing is reflected in their work.

“The kids want to achieve,” he said. “That’s a part of the culture. I always get positive feedback from students, parents, and teachers. There’s camaraderie amongst both staff and kids.”

When he isn’t teaching music, Mr. Perini loves to play music. Currently, he performs with the Irish-American group, the Willie Lynch Band, throughout New Jersey, New York, and Delaware. He plays the keyboard, clarinet, saxophone, flute, and the Irish tin whistle, an instrument similar to a recorder.

Married for almost 50 years, Mr. Perini has two children and three grandchildren. Between teaching and performing, he hardly has time for much else.

And what’s his wife’s take on his passion for music? “Adjusted is probably the best word to describe it,” he joked. 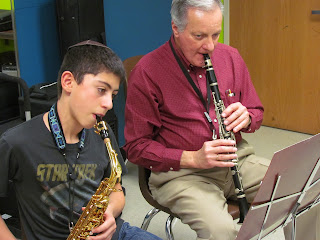 In addition to teaching at various public and parochial schools, Mr. Perini owned and operated Perini Music Studio in Somerville. He also was a computing instructor and owner of Compu Ed Services, Inc.

Mr. Perini attended the U.S. Navy School of Music and was First Clarinetist for the First Army Band in New York.

With all these accomplishments, Perini says he loves being a music teacher most of all.

“You always want to be innovative,” he said. “I feel more of a teacher of music now than ever before. I never feel like not wanting to come to work. Golda Och Academy is the best.”


For previous GO Behind the Scenes, click below:
Jordan Herskowitz
Paula Spack
Sandra Charlap
at 12:48 PM No comments: