Roaring Sounds of Laughter After 5 p.m. in the Lower School 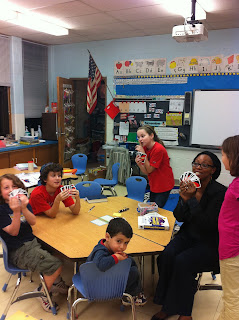 Last Monday was a usual day for Funtracks and Aftercare at Golda Och Academy. Funtracks is over at 4:15 p.m. and the Aftercare kids can be found in the classroom finishing their homework. On any given day, around 5:00 p.m. the building is quiet more often than not. The only children in the building at that time are the kids who stay in Aftercare. So when I heard yelling and screaming in the hallway I was a little concerned. You see, my desk is in the main office, which is almost the furthest point away from the Aftercare room on the first floor. I immediately picked up the phone and called down to the Aftercare room and spoke with Ms. Keisha, GOA’s new Aftercare teacher, to make sure everything was ok. Ms. Keisha was laughing, almost uncontrollably, when she answered the call.

She explained to me that everything was ok, and that they were having an Uno Tournament. I decided to walk down and have a look for myself. When I got down to the Aftercare room, the laughter and shenanigans were still in full swing. Four out of the five kids in aftercare had chosen to play in the game with Ms. Keisha. Miri told Ms. Keisha she was “bleeding”. To which Ms. Keisha replied, “Where? Tell me where I am bleeding!” Miri explained that “bleeding” in Uno meant that you were showing everyone your cards! There was a roar of laughter, which was riotous, from the kids over Ms. Keisha’s lack of understanding of “Uno terminology”. 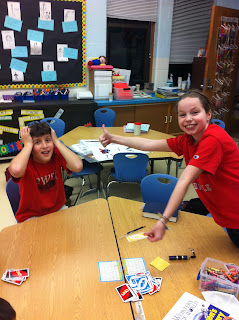 The hootin' and hollerin' continued as Avraham threw down a draw four card to Ms. Keisha. Ms. Keisha groaned as she picked up her four extra cards and all of the children continued to laugh hysterically. Ms. Keisha asked, “Why do I have soooooooo many cards?” Theo, Avraham, Miri, Avi and Naomi found this statement to be hilarious. This seemed like the best game of UNO I had ever had the pleasure to witness.

The volume of laughter from the kids and Ms. Keisha was a wonderful sound to hear. It made me stop and think for just a moment. It made me realize how grateful I am that Ms. Keisha has joined us this year. It made me thankful that she takes the time to sit down and play a game with the kids in Aftercare each and every day. The kids in Aftercare come in at 3:15 p.m. and get right to their homework. The children who have no homework get busy playing. Ms. Keisha and the children spend a portion of everyday out on the playground or so they have time to run and play in open space. I often peek in on Aftercare and I am always pleased to see the interaction between Ms. Keisha and the children. Ms. Keisha and the kids can be seen on any given day jumping rope, reading stories or building with blocks. Whatever the task, Ms. Keisha has shown that she is up for it!

If you are in the Lower School after 3:15 p.m., please take a moment to welcome Ms. Keisha to GOA. She is a wonderful addition to our afterschool team!
at 2:07 PM No comments: