Golda Och Academy's own Yaffa Malashock, one of our Upper School teachers, will be representing our school at the West Orange Diversity Day this Sunday, May 22.

Morah Malashock will be reading stories in Hebrew -- including some Dr. Seuss favorites -- at the festival, which will be held at the Pleasantdale School in West Orange.

From the West Orange Diversity Day website: In West Orange we have more than 50 different languages and countries represented. What a diversity and what a strength! Having a diverse population is an asset to any town and having multilingual individuals adds a lot of different dynamics. A lot of the multilingual and multicultural families in West Orange have moved here from their native countries. They have first hand knowledge of the world. What an asset! Let us take advantage of what they can offer our town and let's celebrate! The event is FREE to visit.
at 3:23 PM 2 comments: 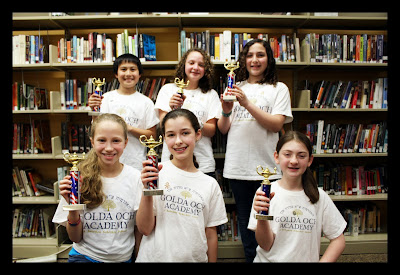 We want to say "Congratulations!" to our sixth-grade Battle of the Books Competition team, which brought home the First Place trophy with a perfect score at the Essex & Union County Battle of the Books at Chatham Middle School on Thursday. The winning team included Lindsay B., Emma M., Kimberly R., Josh S., Nava W. and Isabel Y.

Battle of the Books is a literary quiz competition. Over the course of the year, students read from a list of 15 books selected by a committee of teachers and librarians. They then participated in battles, answering very specific questions about the plots, characters and themes of the books. Battle of the Books began in 1982 and was created by a librarian from Urbana, IL, and it has since spread across the country.

Golda Och Academy has been competing in the Essex & Union Interscholastic Battle of the Books for more than a decade.
at 2:02 PM No comments: